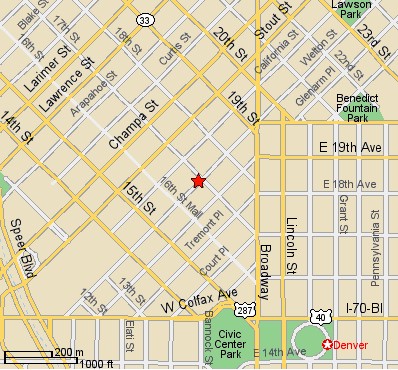 We are located in Downtown Denver:

From I-25 and Colfax

“A mecca for millennials.”

A “hot destination for … companies in search of talent.”

Those are just a couple of the ways Forbes magazine describes metro Denver, which it named the nation’s best place for careers and business among 200 large cities for its annual report.

This is the second year in a row Denver garnered the top spot.

And three other Colorado cities are in the top 30 on the list.

Denver’s “relatively central location makes it a natural location as a distribution for hub for the American West, while also supporting a number of growing industries in technology and telecommunications,” Forbes says in its report. “Its location just east of the mineral-rich Rocky Mountains range encouraged mining and energy companies to spring up in the areas, making the energy industry another staple of Denver’s economy.”

To compile its annual report, Forbes looks at data in the U.S.’s 200 largest metros and ranks them across 14 metrics related to job growth, costs (business and living), income growth, quality of life and the education of the labor force.

Forbes also touted Colorado’s many cultural attractions, including its “nationally recognized” museums, the “second largest performing arts center in the nation” and its “bustling neighborhoods,” such as LoDo.

“Denver has gained a reputation as being a very active, outdoor-oriented city because of its proximity to the mountains and generally sunny weather.”

Dominion Towers has many amenities provided with tenants in mind – to provide them with an unparalleled work environment that provides an enjoyable and productive experience for employees and to help employers attract and retain the best talent.